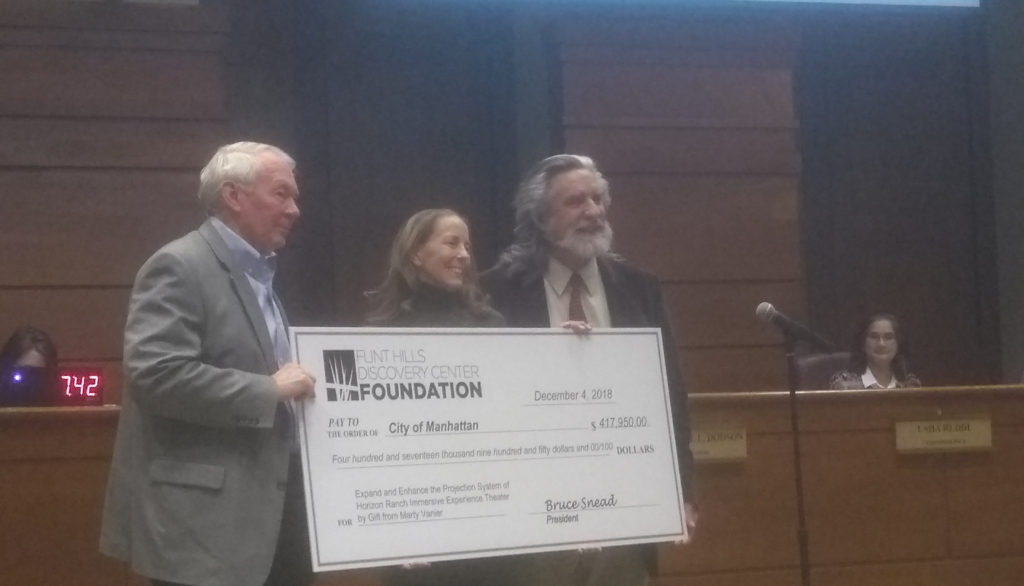 The Flint Hills Discovery Center Horizon Ranch Immersive Experience Theater will be getting some improvements thanks to Marty Vanier.
The Manhattan City Commission unanimously approved the purchase of 4 new projectors using funds donated by Marty Vanier and her late husband, Bob Krause. The projectors cost $417,950 and will replace older, obsolete models. Discovery Center Director Susan Adams said the upgrades will improve the quality of their movie showings
“I think it has lost a little luster lately and I look forward to it as bright and beautiful as it did at the beginning,” Adams said.
Discovery Center Foundation President Bruce Snead said the new improvements are just another milestone for what he called a treasure in the Manhattan community.
“This is another treasure in the form of a person who believes in the mission of the Discovery Center, to shepherd and steward and sustain the Flint Hills,” said Snead. “I’m so thrilled that Marty has listened to this proposal and help shape it.”
Vanier spoke at the meeting as well and said she was pleased to be able to make such a donation and that Bob would have been as well. She also said she applauds the city for taking a risk on the Discovery Center.
“I’m very proud to be able to help,” Vanier said. “I know there are other people in the coming days who you will hear about who will also be willing to help support the Discovery Center and you will find it was certainly worth the risk that you took all those years ago.”
The commission also approved a 2-year contract with film company Nwave. The contract, costing a total of $40,000 per year, would give the Discovery Center rights to show 4 films within Nwave’s library at the center and show additional films other than the featured “Tides of Time” film.  Adams said the new projector system will also make mixing those additional films into their lineup more easy as well.