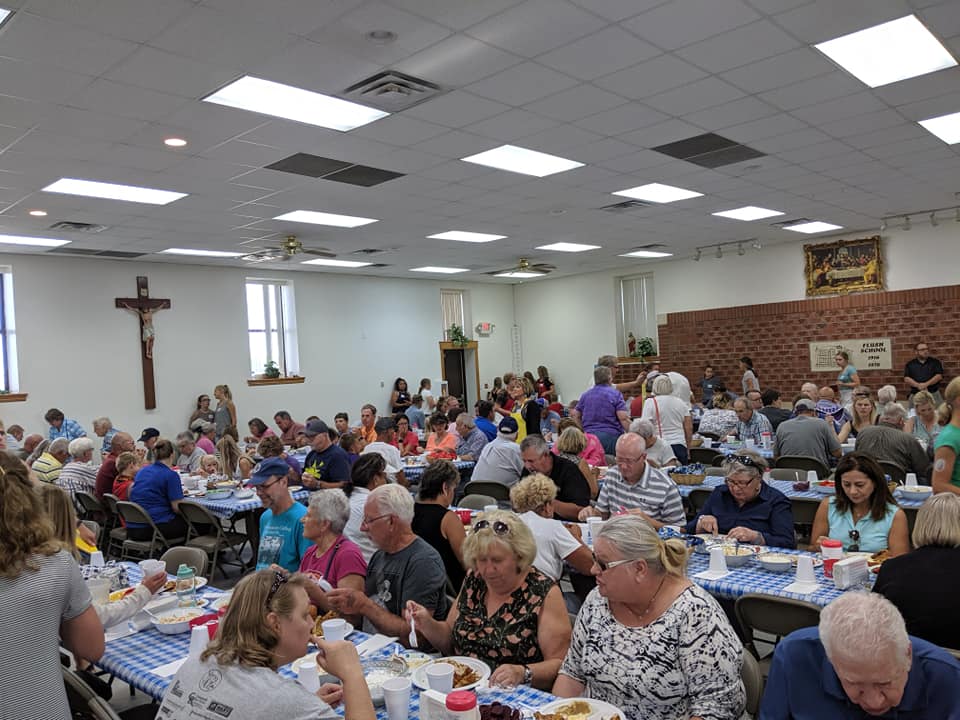 Diners at the 2019 Flush Picnic enjoying their fried chicken dinner — the picnic regularly brings out more than 1,000 and is a big fundraiser for St Joseph’s Catholic Church. (Nick McNamara/ KMAN)

Chicken dinners and good company brought in at least 1,000 people from around the state to the annual Flush Picnic in Pottawatomie County Wednesday.

The event is held every year on the last Wednesday of July at St. Joseph’s Catholic Church, and dates back to the 1930s. They fry all the chickens on-site and parishioners also donate the ingredients necessary for side dishes and three homemade pies each for dessert. The night features the traditional dinner as well as an assortment of games including bingo, a hat-toss and even a barrel train ride. 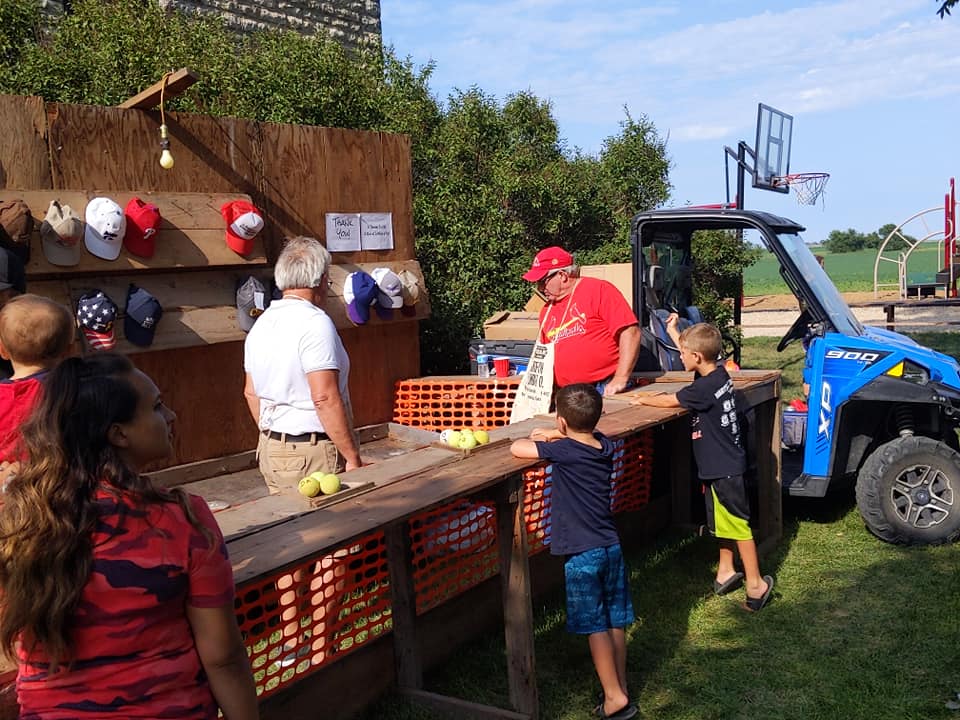 Some of the first children to try out the games at the 2019 Flush Picnic walked home sporting new caps. (Nick McNamara/ KMAN)

“It is our main fundraiser for the parish each year,” says Brenda Heptig of St. Joseph’s Altar Society. “And it’s also a very important community activity — not just for the Flush community, but surrounding communities.”

The picnic takes months of planning and Dwayne Miller at the Knights of Columbus booth says many take the day off to work the event, with set-up beginning the evening before the picnic. 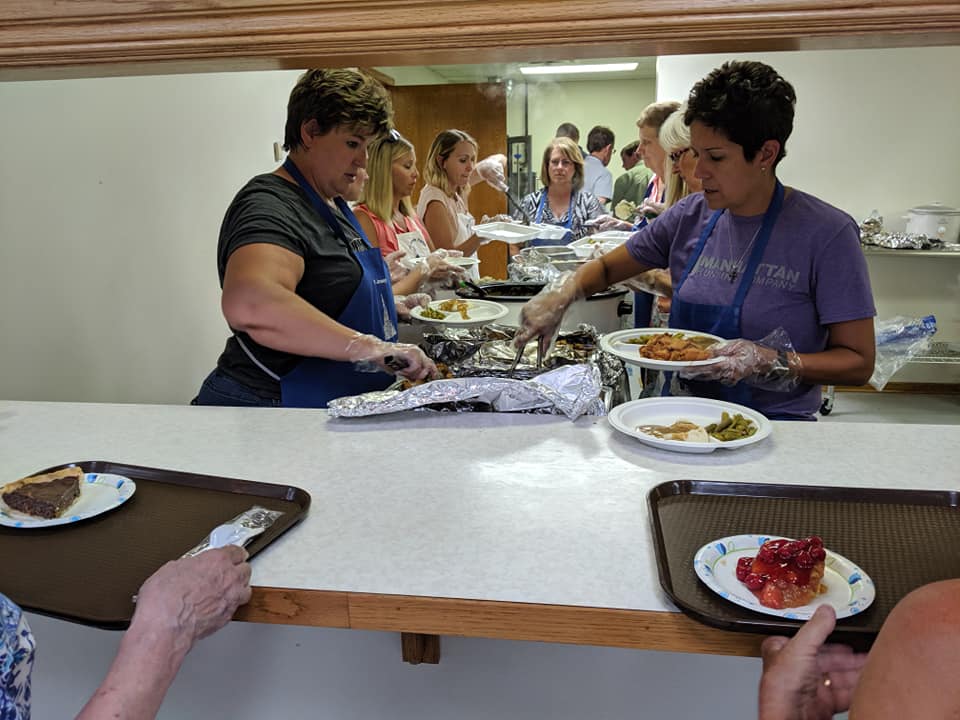 The parish all chips in to help set-up and serve at the Flush Picnic. (Nick McNamara/ KMAN)

Folks from Manhattan, Wamego, Seneca, Topeka and even Kansas City made their way to the city for the historical gathering. Teri Brockish of Flush was helping at the country market and says she’s been going basically her whole life.

“It was started after the wheat harvest was done,” Brockish says. “All of the parishioners got together, started this, and it’s been continued all these years.”

Baked goods and fresh produce donated by parishioners are sold at the country market and there’s also a silent auction and a raffle for a pair of quilts that is given out at the end of the night.

“One was donated by a parishioner and it’s a machine-quilted log cabin pattern,” says Heptig. “The other is called a founders quilt, the top was pieced together by a former parishioner […] and then ladies in the parish get together and hand quilt it — and the really cool thing is it has the names of Flush’s first settlers embroidered in it.” 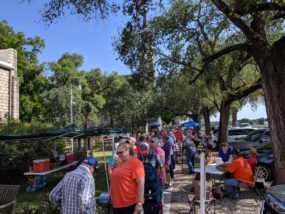 The line stretched for quite a while for hours at the 2019 Flush Picnic. (Nick McNamara) 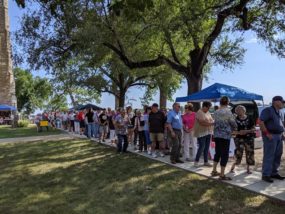 The line stretched for quite a while for hours at the 2019 Flush Picnic. (Nick McNamara)

For many, the picnic is like a homecoming. County Commissioner Pat Weixelman compared it to a family reunion.

“You see a lot of people that you haven’t seen over the last year, got a lot of grandkids out here that come out and enjoy the games,” Weixelman says. “And I’m always about the last one through the meal line — I make it a point that way I can stand around and walk around and talk to everybody.”

Commission Chairman Travis Altenhofen says the good weather was a plus.

“That always helps with getting everyone out and about, it looks like a good crowd tonight.” 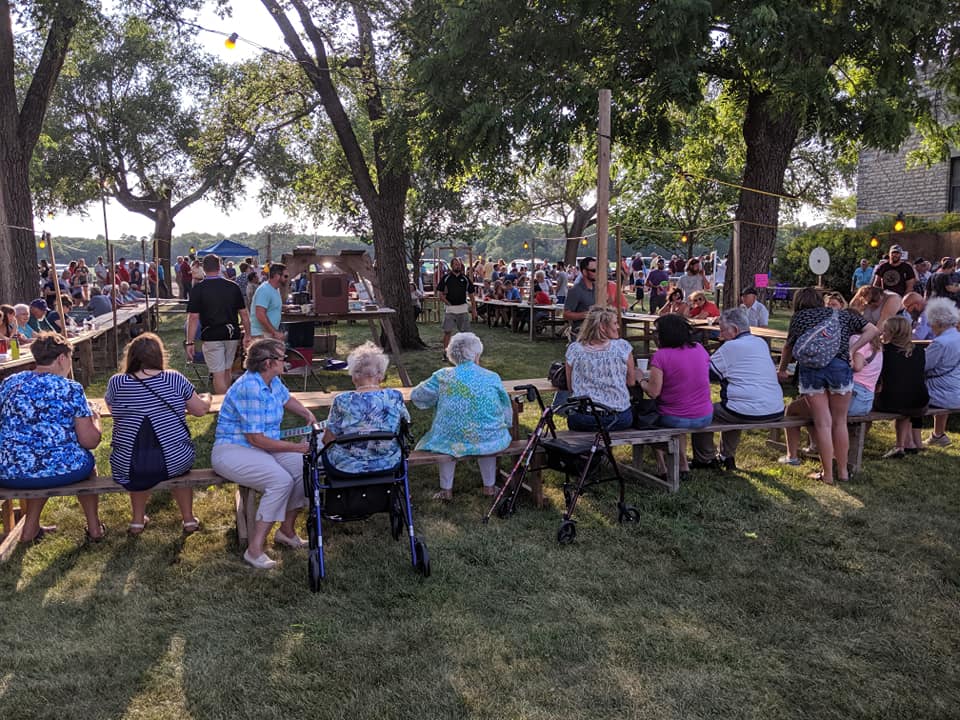 Bingo was a huge draw at the 2019 Flush Picnic, sponsored by multiple businesses and even K-State departments. (Nick McNamara/ KMAN)

The consensus on the best part of the night was the chicken. Anita Reitz of Seneca says her son and daughter-in-law and grandkids are part of the parish and this marks her second year attending.

“The chicken is remarkable, and it’s just a great fun place for adults and kids and to see relatives and friends.”

Carol Eichman says she’s been coming for more than 30 years.

“The fried chicken is fantastic,” says Eichman. “We’ve always had great help from all the people in the community and we have a lot of talent in terms of people and the things they make.”