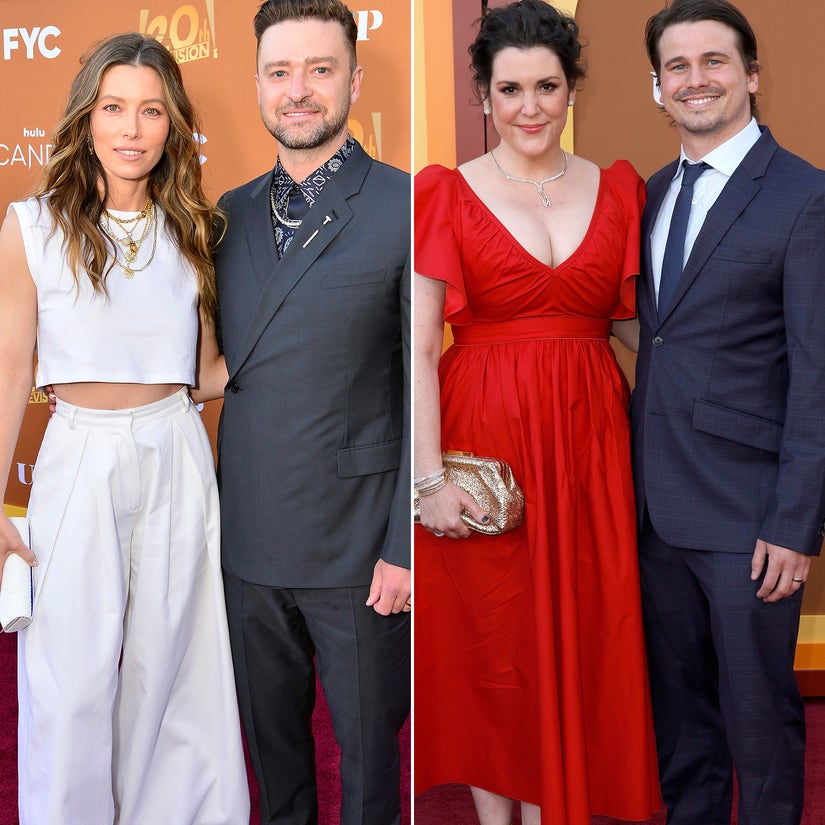 The husbands had joined Jessica Biel and Melanie Lynskey at the premiere, but we all thought it was just to support their spouses — not as stars in the mini-series themselves!

Credit where credit is due, in a day and age where it is very, very hard to keep a secret, everyone involved in Hulu’s new mini-series “Candy” managed to keep two of them.

Even better, they were doing it right under our noses. The new crime drama, based on the real-life story of a woman accused of killing her best friend in the ’80s (thus the hair!), is enjoying a unique release schedule on the platform, which allowed for this surprise halfway through.

It was just this past weekend that stars Jessica Biel and Melanie Lynskey hit the red carpet for the premiere of “Candy,” which is dropping its five episodes one per day this week on the streaming platform.

The women were joined by their co-stars on the show, as well as their famous husbands, Justin Timberlake and Jason Ritter. But what looked just like spouses supporting spouses turned out to be something else entirely.

On Thursday’s fourth episode, fans were stunned to see the men show up on-screen as sheriff’s deputies investigating the murder at the center of the saga. Their roles are expected to continue into Friday’s finale, so these are more than just cheeky cameos.

Kudos to the entire cast and crew for keeping this one a secret, as it helped keep the spotlight firmly on the two incredible ladies in the lead. Jessica Biel even had to some extra work this week when she appeared on “Jimmy Kimmel Live.”

She was asked if she and Timberlake ever planned to work together at some point, and she definitely played it coy. “We want to play adversaries,” she shared.

And just like that, that’s exactly what they’re doing. Biel plays Candy Montgomery, who is accused of murdering her friend Betty Gore, played by Melanie Lynskey, after Candy had an affair with Betty’s husband. She, of course, denies everything.

Timberlake stepped into the real-life shoes of Deputy Steve “Duffy” Deffibaugh, who was the lead investigator in the case. Playing a sheriff’s deputy put Timberlake squarely opposite Biel’s character in the series. They share several scenes together this week as she tells her tales, and he’s clearly not buying any of it.

As for how Timberlake wound up in the role, Biel revealed to ET that he actually volunteered to do it. While the two were looking over the script, he asked about the deputy role and she told him they were out of money and would probably have to just hire someone local to fill it. “And he goes, ‘I want to play it,'” she said.

Ritter was brought in after showrunner Robin Veith saw a picture of him sporting a mustache and thought he totally had an ’80s throwback vibe. “She was inspired by his ’80s cool, edgy fireman look,” Lynskey told ET. Alas, the mustache did not make the final cut.

Biel also told the outlet that the experience actually bonded Timberlake and Ritter. “Clearly, Jason is a comedic genius and Justin is in his own right as well,” she said. “And the way they work off each other and the improv that they did, it was amazing to see.”

Lynskey said that through the process, which saw the men “text all the time” to discuss their characters, as well as “long phone calls,” with Biel adding that they’d basically “become besties.” Timberlake and Biel shared their “Candy” looks on Instagram after the episode dropped.

“Candy” concludes with its fifth and final episode — featuring both husband-and-wife duos — Friday on Hulu.