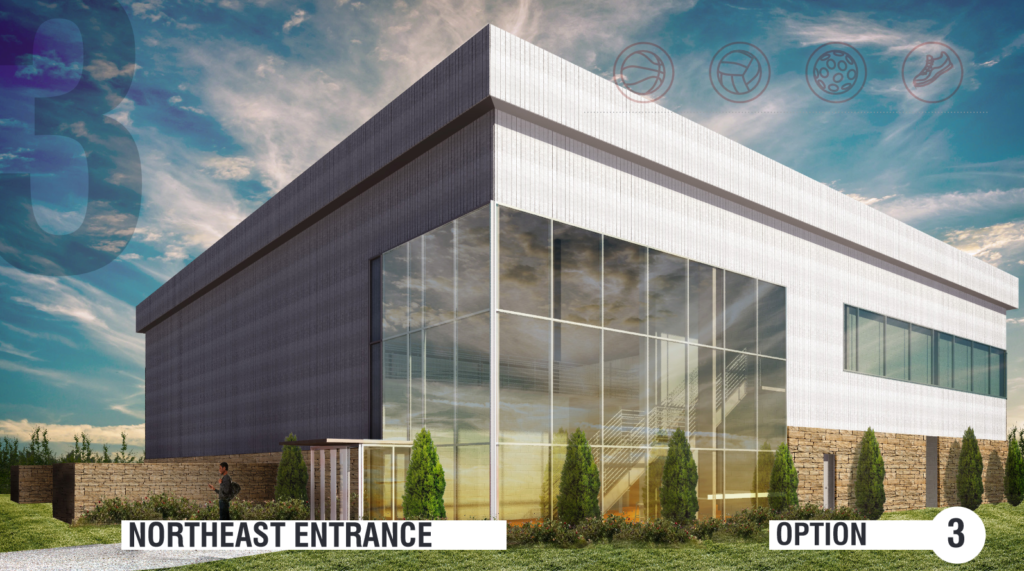 A depiction of the chosen Douglas Recreation Center design by Bruce McMillan Architects. (courtesy of the City of Manhattan)

After previously tabling the vote, the Manhattan City Commission unanimously approved a final design concept for the Douglas Recreation Center at its Tuesday meeting. McMillan Architects will now finalize the plans for the center, which could be open as early as November 2020 based on a tentative timeline.
The commission postponed the decision in April in order to see an additional design option that included a 3-lane elevated track — a feature desired by the Douglas Center Advisory Board and the surrounding neighborhood. The track was reduced to two lanes as a cost-saving measure as the budget had previously been constrained by the limits of a federal grant intended to fund the project, which ultimately was not allocated to the project.
The cost of the building as designed runs between an estimated subtotal of $3.7 million for the base building and $4.5 million if the commission chose all possible additions to the center. At its most basic, the center can be programmed to accommodate various sports, featuring an 84 foot KSHSAA basketball court, 2 NCAA volleyball courts, 2 pickleball courts. Two optional rooms that would bump the cost to the maximum total are a multi-purpose community room and a fitness room.
Mayor Mike Dodson says he doesn’t want the final design of the base building without optional rooms to be oddly shaped.
“I want a rectangular building,” says Dodson. “When we start building notches, having done this before, it’s too expensive.”
The Douglas Center Advisory Board, as well as Center Director Dave Baker, believe the design will meet the community’s needs into the future.
“I know for a fact how much the Douglas Center has changed people’s lives with the things that we’re doing there today,” says Baker. “And a new facility that meets all these kinds of [needs]will continue to make Manhattan a better place.”
The timeline has the design being finalized in July, returning to the commission for approval to go out to bid July or August, and construction beginning possibly this November.
Other design options had estimated maximum price-tags of $5.1 million and $4.2 million. Commissioners also authorized administration to issue general obligation bonds to temporarily finance the project, giving the city three and a half years from issuance to structure the debt and how they’ll pay it down. Annual payments are estimated between $340,000 and $410,000.
Multiple residents questioned the necessity of the facility and cost-sense of funding it at this  during public comment. Parks and Recreation Advisory Board Member Dave Schafer says it would be a nice facility, but that the city backed into the situation after federal funding fell through.
“And this will be added onto the tax burden somehow because we’re now going to pay for it,” says Schafer.
Some design costs can be paid with federal CDBG dollars. The rest of the project could be funded with a new sales tax if approved by voters in November. Adding the cost to property tax would have an impact between .5 and .9 mills. No decision was made on funding Tuesday.
Commissioner Linda Morse says her preference for funding would be through a new sales tax rather than other alternatives.
“I am a person of my word, and we committed to funding the Douglas Center,” says Morse.
Commissioner Wynn Butler says he doesn’t have an issue with the Douglas Center or the design, just with its cost and how it’ll be funded. He voiced multiple concerns about how the process played out in addition to proposing to use economic development funds to finance it. Ultimately, Butler voted in favor of the design.
“But my expectation still is that this get funded some way other than the mill levy,” says Butler. “Because if I have to vote on it later, you’ll get a no out of me on that one.”
Commissioner Jerred McKee questioned why the commission scrutinizes the Douglas Center project more than other major investments by the city. He adds that Manhattan is lagging behind similar communities in terms of recreation center availability and says he sees the project as an investment in that community.
“We’re having a conversation about the Community House right now because it’s so far gone there’s nothing that we can do with it that’s economically feasible for the city — we’re thinking about off-loading it if the right offer comes that preserves its historical value,” says McKee. “I feel like if we don’t invest in the Douglas Center now, we’ll be having the same exact conversation about the Douglas Center 10 or 15 years from now.”
Mayor Pro Tempore Usha Reddi says none of them want to see a mill increase and the city needs to continue to look at a sales tax for it funding and make it clear in the ballot question that part of the funds will be going to this facility.
“This is a family community center, I feel it’s an equity issue for this neighborhood, it is a mental health issue, it is a physical health issue, and this is very much necessary in our community,” says Reddi.
Mayor Dodson says the city will need to watch their “P’s and Q’s” on the project due to the amount of dollars they’re dealing with.
Related, the commission also approved burying the overhead electrical lines that feed into the center by 4 to 1 vote. Commissioner Morse was the lone dissenting vote. The total cost of the project is estimated around $160,000.
Parks and Recreation Director Eddie Eastes says burying the line is necessary due to set-back rules. If not approved, the design of the entire center would have had to been re-evaluated.