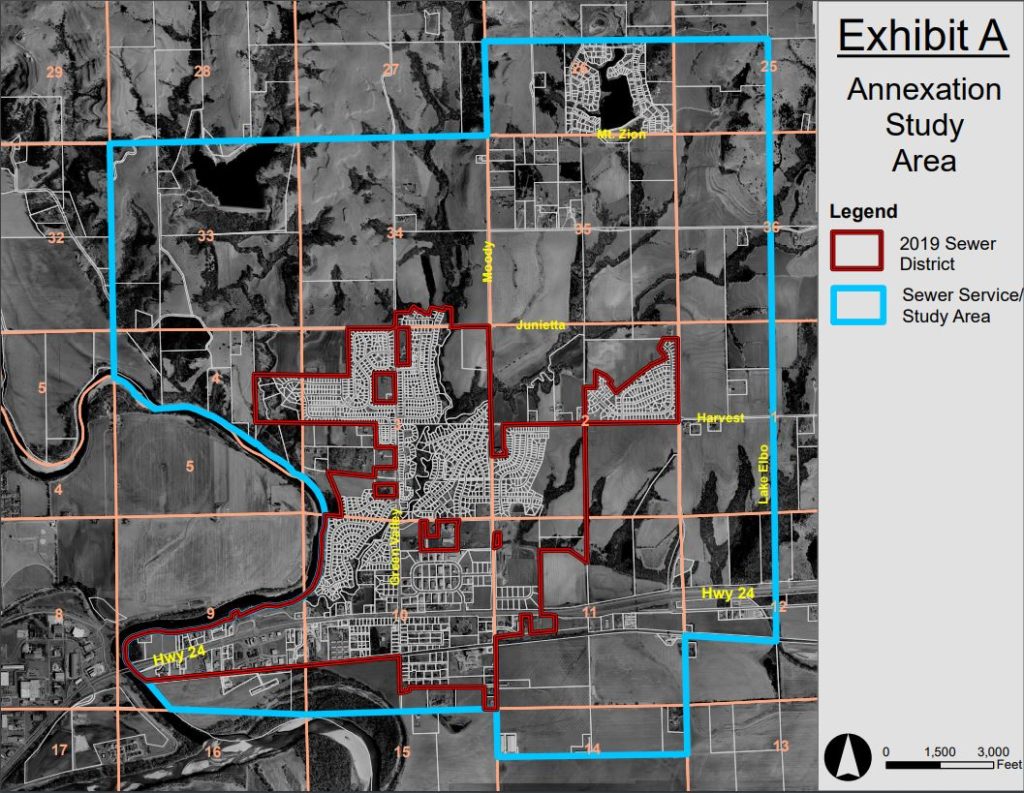 Courtesy of the City of Manhattan.

Manhattan is seeking more data on what would be the costs and benefits of extending the city limits east by annexing a portion of Pottawatomie County’s Blue Township. The City Commission unanimously approved requesting proposals from private contractors to study the topic at its Tuesday meeting.

The area in question is the Green Valley portion of Blue Township, falling in the Blue Township Sewer District for which the county contracts water and sewer services from the City of Manhattan. The area has seen significant growth in residency as well as commercial activity, leading the Pottawatomie County to work on a governance study to investigate options on how to best improve services there. The city, Riley and Pottawatomie County jointly identify the area in the potential future growth map for Manhattan.

The study will analyze the feasibility of annexation and the long and short term impacts it would have on both residents and governmental organizations. Two of the main objectives of the research will be evaluating Manhattan’s ability to provide public services to the Green Valley area at an equal or higher level than it currently receives as well as whether annexation would be a financial burden or boon for residents or the city.

“Well, I think we have to be informed, and i think having a consultant who has some experience in this area is the way we ought to go,” says Commissioner Linda Morse.

The City of Manhattan has made several million dollars worth of infrastructure improvements in the Highway 24 corridor and in the Blue Township urban growth area. In addition to water and sewer services, Manhattan also contracts to perform street light maintenance for the area. The study will take into account these current agreements and ways they could change if annexation went forward.

“I would say if Green Valley decided to become its own town, I would push for us to re-look at all those mutual aid agreements,” says Commissioner Jerred McKee.

Mayor Pro Tempore Usha Reddi says this isn’t going to be an overnight process. A tentative timeline puts completion of the study falling in November 2019 if all things go as expected.

“This is a two-way street, this is a conversation that’s going to continue happening with Manhattan residents as well as with Pottawatomie County residents,” Reddi says. “So I don’t want people to assume something is taking place or that Manhattan is taking over or anything like that.”

No cost is associated with the study yet, but once they receive proposals they’ll begin to get an idea what the cost will look like. The plan is to fund it from a combo of dollars from the water, wastewater and economic development funds.

Commissioner Wynn Butler says he has no personal interest in annexation “but would do it if the people who live there want to be annexed — it would have to be their choice, […] not our choice, their choice. And then two, it can’t drive up city taxes. It has to pay for itself.”

Pottawatomie County Administrator Robert Reece and Commissioner Pat Weixelman were in attendance. Weixelman spoke during public comment, questioning why they would consider such a large area compared to other annexations they perform. He also was in favor of Manhattan studying the topic so residents can also benefit from the collected information.

“And I would like to have a person involved in that,” Weixelman says. “And it might even be somebody from the commission or a person from the immediate area itself. ”

“I think you’ve got some good ideas about working together,” says Mayor Mike Dodson.

Weixelman also noted that the results of their studies and public meetings in the area have found a preference for incorporation over annexation — which multiple residents of the area came to express. Gail Lortscher said during public comment that she was planning on retiring to Green Valley and doesn’t want to be priced out by rising taxes.

“And I really feel if this area gets annexed into the City of Manhattan that’s exactly what’s going to happen,” says Lortscher. “Because that’s what’s been happening to everyone else in Manhattan.”

The findings will be public and available to residents as well as area city and county governments to review. Based on the findings, Manhattan City Commissioners may choose to enter a second phase of the study — creating an in-depth plan that lays out the timetable and cost of extending services.