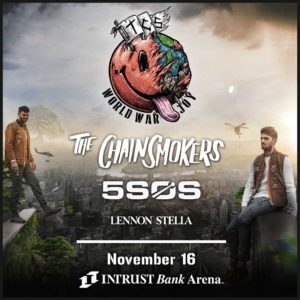 Grammy Award-winning artist/producer duo The Chainsmokers have announced their massive “WORLD WAR JOY” North American headline arena tour for fall. Multi-platinum band 5 Seconds of Summer, who is featured on The Chainsmokers’ latest single “Who Do You Love,” will be joining all dates along with rising pop star Lennon Stella, who is opening the show. The 41-city tour, produced by Live Nation, will kick off on September 25 in Cincinnati, OH and make stops in major cities across the U.S. and Canada before wrapping in Vancouver, BC on December 6.

This is a show for all ages.