Explosive situation turns out to be beef stick

Of course this had to happen in Kansas. It couldn’t have happened in Florida. Or Arkansas. Noooooo.

Police in Greensburg, located west of Wichita about two hours, were called to a parked car in front of a business that someone claimed had a stick of DYNAMITE on the front bumper.

Greensburg PD and fire fighters, as well as the Kiowa County Sheriff’s Office, responded and found that it was a beef stick. Still in it’s wrapper. A freaking Slim Jim. 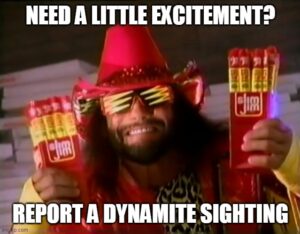 No one asked you, Macho Man.

Police reassured the public in a Facebook post that there were no explosives no threats to the public.

With the possible exception of later, after the beef stick had been consumed.

The owner removed the suspicious beef stick without incident.