An unfortunate side effect of trying to make the sugar-loaded cereals you grew up with a little healthier for today’s kids has been to sacrifice the taste of those cereals.

Companies like General Mills, who makes Trix, Cocoa Puffs, and others, tweaked the recipes to eliminate artificial flavors and extra sugar, though the results have been…less than favorable. Sure, if you grew up with the taste of today’s Cookie Crisp, you might not know the difference. 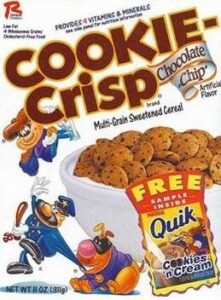